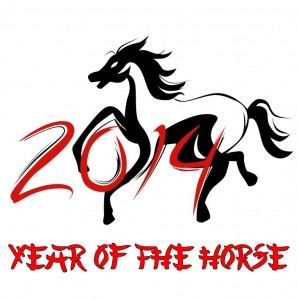 Year of the Horse

From the 31st of January 2014 to the 15th of February 2015, it is the year of the horse according to Chinese zodiac. Chinese Astrology has fascinated many western cultures throughout the ages, as it borrows many western astrological concepts. It also incorporates aspects of Chinese philosophy such as harmony, heaven, earth and water. Chinese ideals, culture and even medicine are based on intricate ideas, which became more complex over time.
Each Chinese year is named after a common animal with this year’s being the horse. Whereas the western zodiac signs are named after star constellations and the figures each constellation represents. Depending on where the Sun was positioned in the sky at the time of one’s birth was indicative of their zodiac sign. In the Chinese zodiac, animals were assigned to dates and years that were already noted in advance.

The horse is part of a twelve-year cycle of animals. Each animal sign interacts with five elements: earth, fire, metal, water & wood. Thus, each year is not only an animal but an elemental one as well. 2014 is known to many Chinese people as the year of the Wood Horse. Last year’s sign was the Water Snake. The horse is also the seventh in this cycle.

What does all of this mean?

The horse is energetic and fiery. Its western equivalent is Gemini. Horses are freedom-loving creatures that crave to roam while their other side yearns for love and intimacy. Both qualities can trap the horse as it follows and independent course but needs companionship to ground it.

The horse is attributed to Summer. Its fixed position is south and its fixed element is fire. Therefore, if you live south of anywhere you can predict fiery situations. Things may heat up for good or for bad during the Summer months. Even if your animal sign is not a horse, the year itself will affect how your sign will interact with it.

If you believe in astrological events and its connections to human behaviour and traits, then you are probably wondering what this means for the year 2014. Well, astrologers are convinced this year will be a prosperous one if you have a business in the agriculture or lumber industries, and media companies (relating to newspapers and magazines). Seeing as the horse likes to gallop at a steady pace before it darts ahead, there will be slow moving in the first half for many businesses until a final latter half of the year of fast-moving markets. Apparently financial companies will suffer this year as are those industries related to metals and water.

Want to know if you were born in the year of the horse?

Here’s a list of dates and years to find yours…

STAR by Numbers 2013: A year of translation