You are here: Home1 / About2 / Blog3 / Translation4 / Translating Movies: Titles, Subtitles and Dubbing 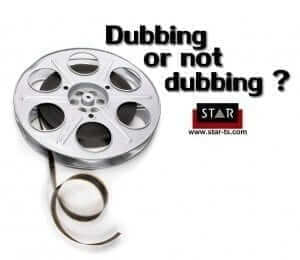 Translating movies: to dub or not to dub?

In Europe and Latin America, movie dubbing is a fairly common practice. After the Second World War, countries like Spain, France and Italy had a strong demand for multicultural communication and an increased demand for content. Media in the form of music, film and television arrived from across the Atlantic and Great Britain.

Research showed that in Latin cultures, people didn’t like watching original English language programmes with or without subtitles.

A recent study showed that if a program was broadcast in its original format for television, the channel would lose up to 30pc of its audience.

Meanwhile, Scandinavian countries have a much stronger English language culture and greatly preferred the originals.

Dubbing seems to be snubbed today by the younger generations who are fond of American TV shows available for download. Oftentimes for free! However, dubbing is necessary for broadcasters because it offers comfort to them in terms of delivery and ease of production. Here is great article explaining what exactly is dubbing?

Viewers of dubbed programs are often sensitive to translation quality, especially as this can sometimes be of questionable quality. A dubber has to perfectly master the source language, typically their native one, and the target language. If there’s a mistake, it’s very rare that a new recording is made.

It’s an expensive process, so normally you only get one take on it.

There are lots of expressions, idiomatic ones, that are language specific – often seen as colloquial. And it’s not an easy task to translate them accurately. The movie translation controversy doesn’t stop there. Sometimes you can find silly errors or inconsistencies in the title of films or TV shows.

Some titles will be translated directly, but their meaning is not exactly the same because of the mistranslation or slightly different translations given. For example, Home Alone was translated into French; its title in France read “Maman, j’ai raté l’avion !” or Mom, I missed the plane! Another one is Die Hard With A Vengeance, which was translated into Danish as Die Hard: Mega Hard”. Ha!

The purpose of translating movie titles into something more palatable for its target demographic is primarily to encourage maximum public viewing. Enabling the viewers, no matter where they are in the world, to better understand what it is they are watching. The use of professional voice actors can help improve the character and style of the movie.

Although differences in meaning can lead to funny titles that will always make us laugh; however, from an English speaker’s point of view.