Rosetta and The Comet Landing 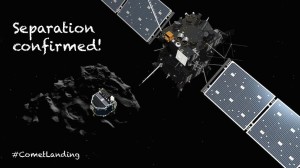 At 08:30 GMT on the 12th of November 2014, the Philae (spacecraft) (lander) separated from the Rosetta Mission spacecraft. The Rosetta spacecraft left Earth 10 years ago to make its journey to a distant comet known as Comet 67P/C-G.

This has never been achieved by humans before! But what’s its significance? It’s all about discovering the origins of our solar system. Scientists hope to be able to study the oldest building blocks of such systems: comets.

Why did the ESA, European Space Agency, name it Rosetta?

In 1799, archaeologists found a volcanic basalt slab of rock near the Egyptian town of Rashid (Rosetta to us). Thus, the stone was named Rosetta and it helped revolutionise our understanding of an ancient civilisation.

There were three carved inscriptions on the stone, all written in two forms of Greek and Egyptian. The mysterious hieroglyphics — the written language of the ancient Egyptians, as they became known —  were eventually deciphered by historians. It was a breakthrough for scholars and linguists around the world and enabled the history of an almost forgotten culture to be pieced together.

The Rosetta Stone was the key to an ancient civilisation. The scientists at the ESA named their intrepid Rosetta mission so, as it will allow them to unlock the mysteries of all comets alike. And to better understand our solar system’s formation.

Moonwalker: The Making of a Video Game

What’s the difference between Spelled and Spelt ?
Scroll to top