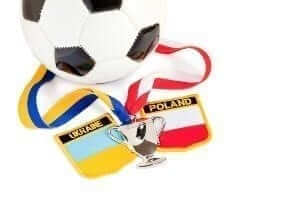 Today we decided today to look at English in sport.

During any sporting event, you will find that a lot of the athletes and players will actually speak English. Like football for example, most players speak English (especially sports vocabulary). Nowadays, English is international language and also in sport.

During Roland Garros, in France, the Spanish tennis player Rafael Nadal conducted his interviews and his final speech in English. Quite often if there are teams in sport from different countries, referees will speak English. For that, players have to know this language to understand the day to day rules.

European universities who teach sports, like STAPS in France, provide English courses every week. Now, its a pre-requisite to speak English in all sectors, and in sports to allow matches and games to unfold properly.

In rugby, for example, except for national championships, there are special words for the Scrum that players have to know to execute well. Referees say: “Crouch, Touch, Set!”. This is not the really same translation in other languages, so they have to learn the exact word for each action.

So it’s a credit to all international sports people. They excel at their sport but they also have to develop other skills (like English) to improve them!

What is the difference between duty and responsibility?
Scroll to top