You are here: Home1 / About2 / Blog3 / Languages4 / Chimpanzee Language Discovered 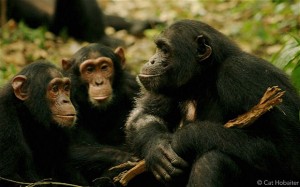 Chimpanzee Language: communicating with one another in the wild

A team of researchers from the University of Saint Andrew’s, lead by Dr Catherine Hobaiter, have translated a communication system of gestures used by chimpanzees in the wild.

In their findings, they documented 19 specific messages from one chimp to another and they discovered a lexicon of 66 gestures used within these messages. All their work has been published in the journal ‘Current Biology’.

The scientists followed and filmed a group of chimps in Uganda and observed 5,000 incidents of these gesture of communication. It was once believed that only humans were capable of deliberately sending messages or gestures to another individual. As scientists looked towards apes and chimpanzees alike, they saw the incredible similarities we share with them.

Chimpanzees are more closely related to humans than they are to the other ape families.

Having witnessed these messages, the team of researches have come to the conclusion that, “they’re the only thing that looks like human language in that respect.” The chimps’ messages were also unambiguous and used to convey a specific feeling or meaning from one animal to the other. While other apes and monkeys are also known to understand complex information, chimps alike do not use calls or their voices to communicate.

Among all the filmed gestures, the most convincing and unambiguous were leaf clipping and a grab.

Leaf clipping
When a chimp conspicuously nibbles leaves in front of another chimp, it’s to elicit sexual attention
A grab
This is interpreted as “stop that!,” “climb on me!” or “move away!”, depending on the context, of course!

Researching the communication between great apes and chimpanzees allows evolutionary biologists to gain more knowledge on the evolutionary aspects of language and behaviour and how we [humans] evolved.

“The big message [from this study] is that there is another species out there that is meaningful in its communication, so that’s not unique to humans,” said Dr Hobaiter.