Dangling modifiers aka misplaced modifiers are all expressions that grammarians toss into the conversation on purpose to confuse and embarrass the rest of us.

So what do they mean? Consider this sentence: walking down the high street, the new shoe shop caught her eye.

We all probably know what is meant, but grammatically what this sentence says is that the shoe shop was walking down the street. The participle is dangling or misplaced or misrelated because it seems to relate to the wrong part of the sentence.

The unexpressed subject of the participle clause that is, the person or thing that is walking down the high street should have the same subject as the (expressed) subject of the main clause: she.

The modifying clause or phrase, ‘walking down the high street’ should always come as near as possible to the noun or pronoun it modifies.

Careless positioning of all sorts of modifiers can cause amusement, confusion or even cause actions for libel.

Another great example that we personally love reads as ‘I once shot an elephant in my pyjamas. How he got into my pyjamas I’ll never know.’ 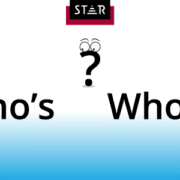 Be Careful with Contractions in English

What's the difference between among and amongst

Is there a space before a question mark?

What's the difference between who's and whose?
0 replies