You are here: Home1 / About2 / Blog3 / Better English4 / Capitalise That, Capitalisation! 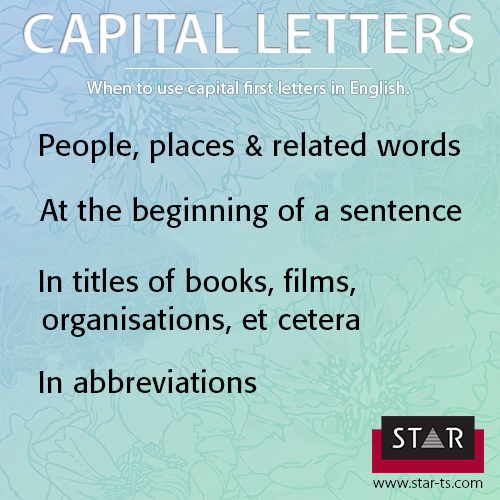 Let’s face it, it can be a tad confusing when it comes to whether a word receives a capital first letter or not. However, there is a general rule of thumb to consider if the first letter of a word is to be capitalized: uniqueness! That is, for instance, if you have word such as Web (short for the World Wide Wide), then Web receives a capital W. There’s only one Web.

Just allowing uniqueness as a prerequisite to capitalization doesn’t seem correct, though. You have probably seen many words with capital first letters without any of them being distinctive. Here are the top four rules to adhere to to know when to capitalize:

Remember to use capital first letters in formal writing. It’s easy to forget nowadays since email and text messaging encourages the use of informal writing.

The UntranslatablesClichés By The Book
Scroll to top