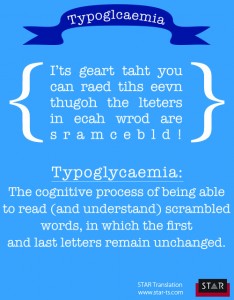 In September 2003, an meme surfaced on the Internet stating:

“I cdn’uolt blveiee taht I cluod aulaclty uesdnatnrd waht I was rdanieg: the phaonmneel pweor of the hmuan mnid. Aoccdrnig to a rseearch taem at Cmabrigde Uinervtisy, it deosn’t mttaer in waht oredr the ltteers in a wrod are, the olny iprmoatnt tihng is taht the frist and lsat ltteer be in the rghit pclae. The rset can be a taotl mses and you can sitll raed it wouthit a porbelm. Tihs is bcuseae the huamn mnid deos not raed ervey lteter by istlef, but the wrod as a wlohe. Scuh a cdonition is arppoiatrely cllaed Typoglycaemia .

Not so much a research study, but based on one man’s PhD thesis that was finalised in 1976. A man named Graham Rawlinson. His work was never published: The Significance of Letter Position in Word Recognition, Nottingham University.

There was little evidence to support the main factors of word recognition and the cognitive processes behind reading written text, but roughly three dozen studies were carried out on both adults and children. It is obvious to some that we read words as a whole rather than reading letter by letter, in one’s native language, of course. Although, it has been stated, to some degree, that when one reads in a foreign language, they tend to read every letter.

Typoglycaemia (or typoglycemia) is what’s known as a neologism, a name for a newly coined word, term, or phrase that may be in the process of entering common use but, that has not yet been accepted into mainstream language. Typoglycaemia is a portmanteau of two separate words: typo, typographical error and hypoglycaemia, a state of severely diminished content of glucose in the blood. We didn’t that make that up!

You can find Mr. Rawlinson’s summary of notes on his thesis on the Cambridge Cognition & Brain Sciences Unit website

Homonyms: we found this humerus!Show Your STAR, Share a Coke Zero!
Scroll to top