You are here: Home1 / About2 / Blog3 / Languages4 / Speak to 3.5 billion people, Top Ten Most Spoken Languages 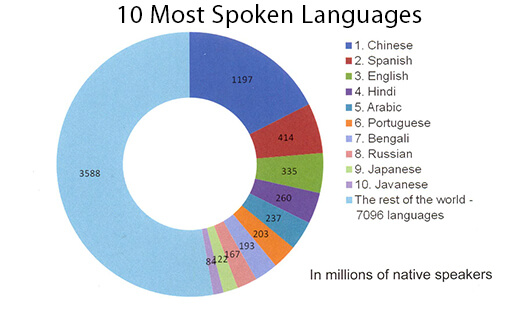 There are an estimated 7,100 living languages in the world that are endangered. The reason for this may be that the ten most spoken languages are rapidly taking over.

These popular languages have their population sizes to thank. Some of  these languages are high in demand for reasons of commerce and trade. But what encourages people to learn a new language? People tend to learn a new language for better work opportunities, travel, social media, to meet new people, education and to better understand new technologies and sciences. Film, music and television have also played a part in encouraging some to take up a language.

What are the most popular languages around the world?

You’re probably not surprised to learn that English is not in the number one spot. Nor is it the second most popular language. China, the most populous country in the world host to a whopping 1.357 billion inhabitants according to a consensus from 2013. Did you know that the Chinese language has 80,000 characters, also known as logograms?

The Spanish language, second on the list, has an estimated 470 million native speakers; thinking of South America may help imagine that it’s a possible figure.

Third on the list is English, with an estimated 340 million people speaking it as a first language. English is an official language in the United Kingdom ( its country of origin), the United States of America, Ireland, Canada, Australia, New Zealand, South Africa and the Commonwealth of Nations.

Hindustani is fourth on the list, with roughly 260 million speakers, it is spoken in India. Arabic is a popular language because it is the language of the Koran. There are 240 million speakers of Arabic. The only country in South America that doesn’t speak Spanish is Brazil. It’s the largest Portuguese speaking country in the world. Approximately 220 million people speak Portuguese as a first language. Brazil’s population was 200.4 million as of last year (2013).

Speak to the World

That’s a total of 3.457 billion people across the top 10 languages. Almost half the population of the planet!

Learning a new language can be fun and the rewards limitless. It has even be documented that speaking more than one language fluently can increase higher brain functions such as cognition and memory retention.