You are here: Home1 / About2 / Blog3 / Translation4 / Localization5 / Great Scots! Scots Gaelic and English Stay Together 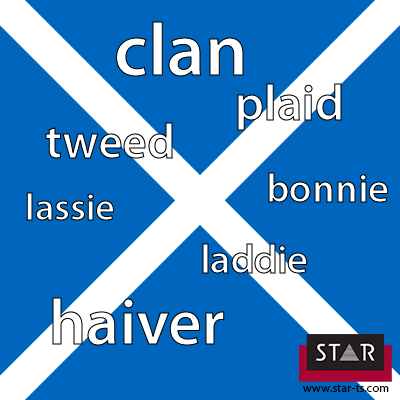 Scots Gaelic and English Stay Together, Despite the Vote

Today, 18th of September, all Scottish people head to the polling stations to cast their utmost important votes. Their votes will decide the future of the United Kingdom as a whole. Will Scotland become an independent state?

Regardless or the result of the vote today #indyref, #voteyes, #voteno, both the English and Scottish languages will stay together! There will always be a Scots legacy in England.

With a media frenzy gathering pace throughout and all eyes on Scotland, we decided to look at some peculiar words in the English language that have their origins in Scottish Gaelic and Scots.

Scots or Scots language is a variety of Gaelic spoken in the lowlands of Scotland and parts of Ulster (Northern Ireland). Scholars and linguistic experts have been debating over the linguistic status and social significance of Scots. Is it a language or a dialect? There is no universally accepted criteria to distinguish a language from a dialect so they’ll be arguing about it for some time to come.

Clichés By The Book