Teams that use Transit experience improved ROI on translation projects with its advanced terminology system and advanced translation reuse management. Transit will help you get the most from your linguistic assets.

The sentence is the basic unit of language. However, it is not necessarily the basic unit of meaning. Translators read sentences in the source text but are only able to do an effective job of translating them if they are able to derive and understand their meaning from the context. This is a principle which was taken into account in the first version of Transit, over 20 years ago. In contrast to other translation memory systems, Transit does away with a database that is exclusively sentence-based. Instead, the full breadth of the context contained in a document remains available in the Transit reference material.

Bubble windows, which provide a dynamic representation of fuzzy matches, allows you to make even more efficient use of the Transit editor. The Fuzzy window is only displayed when there are translation suggestions and then disappears again from the interface after the suggestion has been accepted.

Transit’s tried-and-tested ‘Fuzzy logic’ is now also available in TermStar NXT. Fuzzy search in TermStar NXT not only finds items which precisely correspond to your search term but also all similar entries contained in the dictionary.

Your reference material now has even more value. Dual Fuzzy logic in Transit NXT not only takes account of the source text when searching for translation suggestions, it now also looks at the target text.

See the bigger picture with Transit NXT. Whether you are translating, reviewing, or conducting software localization, with Synch View, all the information needed for translation is available at a glance in floating windows. This consists of the PDF viewer for source documents, the Media viewer for graphics, and the XML/HTML viewer and RC editor, which can preview your translation.

Using the PDF viewer for Adobe FrameMaker, QuarkXpress, Adobe InDesign and Microsoft PowerPoint, the translator, reviewer or terminologist can display the fully structured source text in synchronisation with the language pair. 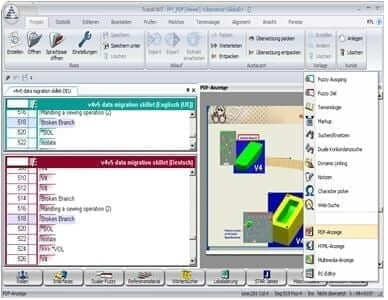