Enterprise Ireland reported in its annual business review that its companies saw an increase in exports up by 10% last year – an all-time high of €20.6 billion.

EI also noted that growth was seen in exports across all sectors and in most export markets.

A 32% increase saw exports of internationally traded software to €1.8 billion; construction and consumers firms saw an increase in exports of 21%, a total of €2.8 billion.

Manufacturing companies reported growth by 11% showing a total of €3.4 billion and food exports grew by 3% reporting, a total of €10.6 billion.

The figures announced today show the strength and capabilities of Irish companies competing at a global level — Minister for Jobs, Enterprise and Innovation Mary Mitchell O’Connor.

“The 2015 export figure of €20.6 billion demonstrates the scale of the success that Irish companies are seeing in terms of winning business at record levels internationally”, Julie Sinnamon, CEO of Enterprise Ireland remarked. 429 overseas presences were established, including 200 in high-growth markets.

Minister for Jobs, Enterprise and Innovation Mary Mitchell O’Connor commented that ‘Irish companies continue to deliver for the Irish economy.’ 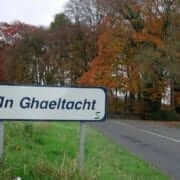 Olympic Flame in Dublin – a moment to shine

Review of the Official Languages Act 2003

GIG: An Gaeilgeoir is Greannmhaire (English)

Irish presidential debate in Irish – Or was it?